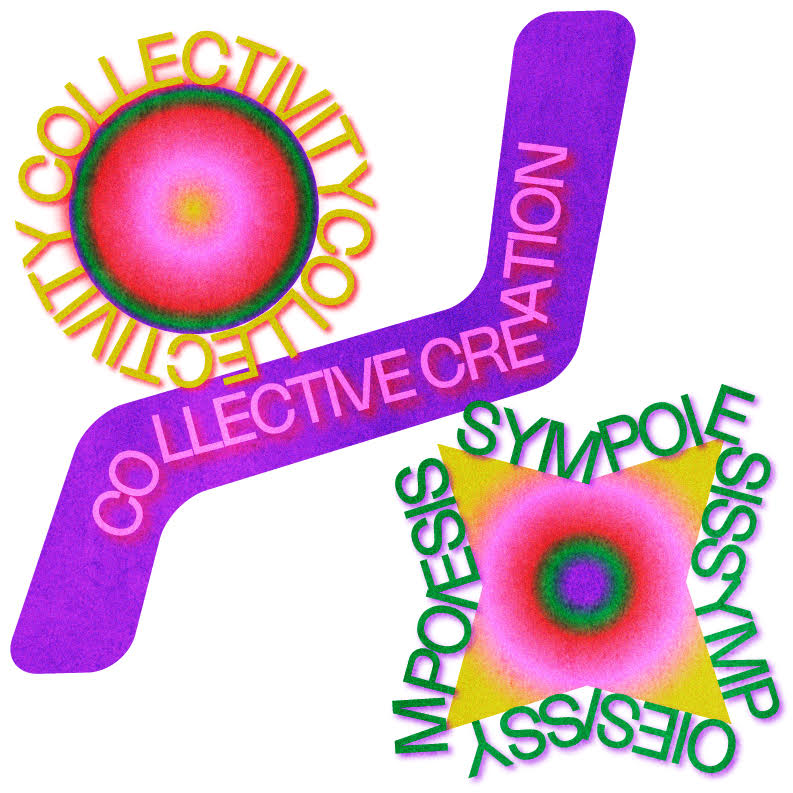 Collective creation is a short text that reflects the terms Human, Posthumanism, and why Virtual Space actually stands in relation to it.

In this text, the term Human refers to humans as we know as the species Homo Sapiens, but also what was formed in societies (formed as a European idea) and social studies about humanism. The terms Human and Humanism are very complex and careful to use because it was also used for single-sided assumptions and exclusions. That is the reason why we need to think about a redefinition of humans in the future, a new Posthumanism.

We now experience what scientists are calling the Postdigital Age. In this Era, a merge of virtual and analog worlds happens. We can see that in social media and video games, but also through the use of Augmented Reality or Virtual Reality. What does that fact have to do with Humans and Humanity?

To start, Homo sapiens are domestic on this planet earth for 200,000 to 300,000 years. Since then, human beings have used tools such as stone implements for their daily life. Not less than 100000 years ago, early humans began to make tools “aesthetic,” even though their function didn’t change. These were the first actions to aesthetics. (Tylen et al., 2020)

When we look back to how Europe in the Renaissance saw the human ideal, it was the most important to act like the idea of the Human and fit its aesthetics.

The Vitruvian Man of Leonardo Da Vinci is seen as one of the humanist ideal’s primary symbols. Made by Leonardo da Vinci in about 1490, the image demonstrates the fusion of mathematics and art during the Renaissance. It illustrates Leonardo’s deep understanding of proportion. Besides, this picture represents how Leonardo relates man to nature.

This image, which puts the human in its center of the whole world, depicts the ideal person for hundreds of years. And it is still effective until today.

This ideal “human” and its appearance, originating from Da Vinci’s artwork, consider only a minimal possibility of a human being: white, European, male, handsome, and able-bodied. (Baidrotti, 2013)

The consequence of this meant that characteristics “besides the norm” were simply not perfect. This so-called Othering aims to call features that are different from the ideal less worthy. And this thinking is dangerous, entirely not true, and fatal.

How can we redefine the Ideal Future Human in our Postdigital age, with a new and more inclusive idea of the human in mind?

When we think about humans’ future, usually some Sci-Fi fantasies come up in our minds – examples like the Matrix, where machines conquer the world and humans serve them. Yes, these fantasies are very creative and also important to imagine. But it seems that the bridge is not linked to our present and the future. Questions like this are often ignored: Who or what is the future of being human? How can our present social systems and injustices actually be reduced? How can we properly redefine our complexity? (Baidrotti & Bignall, 2019)

Donna Haraway redefined the term cyborg in her Cyborg Manifesto in 1985. In her work, the cyborg is not a dystopian creature – the cyborg is a chance for a more inclusive world, which suggested other definitions of Human. To her, cyborg imagery can be an exciting idea of seeing technology to get to know each other in a better way. No matter if it’s science, Artificial Intelligence, or Art, we can use this technology to understand each other. (Haraway, 2016)

In the digital 21st century we live in, objects are a decoration and a symbol of our (social) status, than only their concrete function. The bag is not only a bag anymore – it can have a shape of a plastic heart. Tools are the reflection of symbols for ourselves- we are experimenting with them, seeking attention and satisfaction as they are mirroring ourselves.

The virtual space is an integral part of this, too. It is a space that is part of our daily lives. We can empower ourselves, mirror ourselves, and consume information on a high level. However, also the virtual spaces are often owned by companies with capitalist intentions, such as Facebook, Instagram, or Twitter – just to mention a few.

“The twentieth century has shown us that capitalism does not break; it bends. Furthermore, it bends because it is made by us, by our iPhones, by our everyday travel and consumerism: we are part of the problem. As consumers, we are immanent and not external to capitalism. [..] Everything is research-driven because capital today is knowledge […].” (Braidotti & Regan, 2017)

So even if we want to create something positive with technology, we should also have this complex, capitalist system in mind, unfortunately. Because even the creativity we are producing is the main catalysator of this capitalist machinery.

However, there is not one existing truth or reality – and probably has never been. We, as humans, were and are always surrounded by what is called situational knowledge. Terms such as gender, race, human, life, and relationships are possibly lived and experienced by every human differently.

And every perspective is equally important. In the end, that’s why there can not be only one solution to this issue. And that’s why it is essential that no matter which technology is given, we should ask ourselves: What can we do to establish a more inclusive idea of Humanity in the future?

Virtual spaces offer us a place for self-expression for the first time. If our technologies are used wisely, this mass of technology can also be a chance to reflect on ourselves and give us a space to share and extend knowledge.