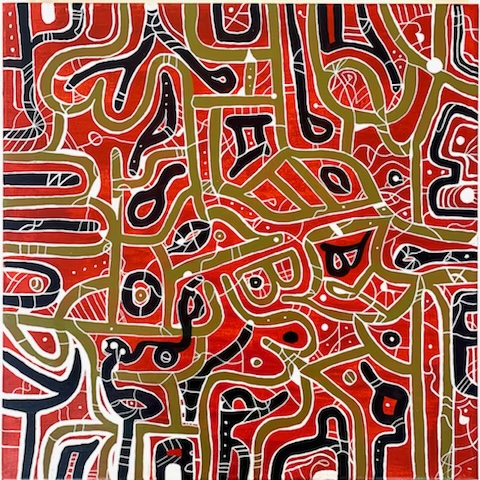 by Sacha Lascaux, from @regartcommun

Italy has been a democratic republic for around 75 years. The 21st article of its constitution, along with multiple sections of the penal code, guarantees freedom of expression. Nevertheless, this nation still struggles daily to ensure that everyone, including the media, can exercise their fundamental right to express their opinions freely without fear of intimidation or victimization. Personally, I spent a lot of time trying to define which one of the many issues related to freedom of expression in Italy was the most needing of attention and I had a hard time settling on one specific topic. Eventually, I chose to focus on a trend that is not strictly peculiar of Italy alone as it is slowly becoming more common in most democratic countries: ideological and political over-polarization that foments a censorial culture.

This growing tendency has been deemed ‘dangerous’ by multiple scholars who argued that extreme polarization can hinder the democratic process (Schulze et al., 2020, p. 2) and that this great divide in the population is not centered on policy beliefs but rather on feelings towards political adversaries (Hetherington & Rudolph, 2015). In this article, I want to argue that political polarization is a growing threat to freedom of opinion. In order to do that, I will illustrate my thought process by first introducing the recent Italian policy-making decision that made me ponder on this issue. The Senate, on 27 October 2020, blocked a draft-law known as DDL Zan. This bill is against homotransphobia and hatred towards people with disabilities (Pignatiello, 2021, p. 6). If implemented, it would have allowed the judiciary to increase the length of sentences when the offense committed could be identified as a ‘hate crime’ (Scoccimarro, 2021). Parliament had gone ahead to pass the bill in autumn 2020 despite mounting disagreements and intensive scrutiny from cultural conservatives, academics, and legal pundits (Allen, 2020). The controversy was mainly caused by heavy politicization of the draft bill and ultimately led to an unrepairable rift in the Italian public opinion. On one extreme there were those who believed that the DDL Zan was liberticidal while on the other it was viewed as a social necessity. The bill’s rejection came after several objections were raised against it by mostly center-right parties such as Fratelli d’Italia, Lega and Italia Viva (Pignatiello, 2021, pp. 6-8). Among the concerns that were raised, the three most debated were directly correlated to freedom of expression. First, Italia Viva’s representatives claimed that the bill criminalized certain opinions. However respect for human dignity is already an insuperable limit for freedom of expression in the constitution, as the Italian Constitutional Court, along with several academics like Caruso (2013), have confirmed. Secondly, there was concern that the law, as an extension of the Mancino law, would include the sections that had been dubbed in the past as ‘unconstitutional’ for limiting freedom of opinion. However, the draft-law explicitly excludes these parts of the Mancino law (Pignatiello, 2021, p. 7). Thirdly, some scholars and politicians accused the bill of using too general terms like ‘sexual orientation’ thus allegedly infringing on the right to legal certainty (article 25 of the constitution) therefore silencing people too afraid of breaking the law (Pignatiello, 2021, pp. 7-8). However, such criticism ignores that these ‘general terms’, being part of common speech, had long been recognized by the Italian Constitutional Court as legal concepts (Pignatiello, 2021, pp. 7-8).

It is interesting to note, for this discussion, that the three most debated concerns raised regarding the bill had nothing to do with the central hate crime issue, but instead pertained to freedom of expression. That is because, while the perceived threats were, in this case, unfounded (as demonstrated), the growing feeling of distrust between polarized factions is comprehensible. Nowadays, the public is increasingly worried that laws could force them to censor their opinions as they have direct experience of pushbacks in both their public and private life. Over-polarization, indeed, translates into the inability to accept a compromise (Schulze et al., 2020) which means that unless you share 100% of your beliefs with your interlocutor, the two of you will never be able to find common ground.

Now, whoever is reading this may think that they often make compromises during an exchange of ideas, but do we really? At the end of debates, it is common to hear the phrase “let’s agree to disagree” which is precisely meant to skip to the next topic without compromising. How many times do we truly leave a conversation with a new-found perspective and appreciation for the other person’s opinions? This intolerance for other people’s ideas does not seem particularly dangerous in a private conversation, but it gets scarier when we observe these attitudes directly affecting someone’s career and position in society. In one’s public life, indeed, their right to free speech is legally protected (as mentioned, it is the constitution that formally provides this protection in Italy).

Despite that, institutions and working places are now finding loopholes to quiet those whose thoughts do not align with their bureaucratic policies. For example, a high-school class in Sicily and their teacher, Rosa Maria, made a brief video clip comparing an anti-immigrant security decree that barred Italians from transporting immigrants into the country to fascist racial laws that Benito Mussolini introduced in 1938 (Tondo, 2019). The video saw the teacher facing disciplinary action in the school, including a 15-day suspension (Tondo, 2019). The case made multiple headlines in Italy, but it is unfortunately not isolated. In public jobs, where the Italian state is the employer (like in Rosa Maria’s case), politics have had a high degree of influence on what someone has been allowed to say out-loud. One notable proof of that was the infamous PM Berlusconi’s “Bulgarian Edict” (18 April 2002) that lead to the dismissal and subsequent banning of two journalists (E. Biagi and M. Santoro) and a comedian (D. Luttazzi) from the Rai, the national broadcasting company (Albertazzi et al., 2012, pp. 217-223).

Overall, in this kind of society everyone needs to fight daily for their right to freely express themselves in nearly every aspect of life. This is not a judicial fight yet, but as polarization grows and the main ideological currents alienate themselves from each other to the point of not even allowing the possibility of a common ground. It is not far-fetched to worry that, in legislative institutions, situations may arise where a predominant group is able to impose its ideology and coercively censor other views.

Given the arguments shortly presented herein, I want to stress the need to address how polarization is steadily stifling the public’s freedom of expression. The best possible way of acting to curb this issue is the outright refusal of accepting censoring in any form by whoever has the authority to speak up, be it parliament or a school headteacher or a newspaper editor. They represent the first and most important line of defense. Therefore, it is up to them to find the bravery and strength to uphold and champion core democratic values such as tolerance, equality, inclusiveness, and to promote a society where freedom of expression holds a central position.