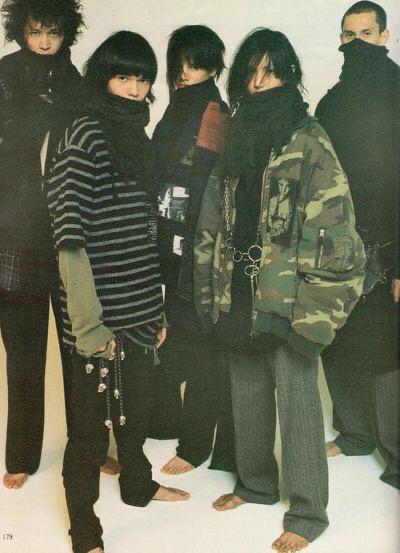 What do you think of when you hear the words “high fashion in the 80s”? Glamour, bold colors, skintight and sexy? Designers like Versace, Yves Saint Laurent and Karl Lagerfeld were really popular and fascinated the masses. But like with every trend, there has to be a counter-trend. Antifashion – but what exactly is that movement and how does it affect the general society up until today?

Yohji Yamamoto, one of the most influential designers of this movement described it as simply not following trends. It all started with him and Rei Kawakubo, founder and designer of the Comme des Garçons, when they both started making fashion in the 80s. Dark color palettes, deconstruction, political references, unfinished garments and oversized silhouettes were their key elements, which were all contrary to the usual high fashion of that time. Many designers followed their philosophy of making garments contrary to the current trend. Some followed the same dark and edgy aesthetic – some others just took the approach to making clothing and designed more minimalistic fashion. Helmut Lang, for example, brought workwear to the runway and therefore making it seen as more fashionable. Jil Sander established the term “lesbian chic” and revolutionized the way we see women through fashion by not sexualizing them anymore and questioning gender roles by making clothing more unisex. Other designers like Martin Margiela started upcycling clothing and sometimes even leaving a garment unfinished or stained to show the backstory of those pieces. Raf Simons followed the dark and dystopian aesthetic of Yohji Yamaoto but kept youth culture in mind while making garments. His style, therefore, appealed more to younger the younger generation and arguably started the trend of modern-day streetwear. His design got really political by referencing soviet culture and drawing inspiration from punk. The general concealing of the natural silhouette by making clothing more oversized also started a shift in the way we view what fashion should be for an individual person – designing clothing disregarding the body and making clothing we feel comfortable in instead of adapting our clothing to certain beauty ideals.

The whole movement shocked the fashion world at the time and many people didn’t want to see it as fashion or an art form because it was so unconventional. But how is this relevant for the current fashion? Now, many years later, this unusual approach to design and the worn-out aesthetic have shaped the clothing we wear today, even everyday wear to a point where we can´t think of fashion without it. Sometimes it just shows through little details like distressing in a pair of jeans, but some famous designers still follow the complete aesthetic and philosophy of the antifashion movement as it used to be in the late 80s up until the early 2000s.

Two ways the antifashion movement can still be seen today in mainstream fashion is through the philosophy behind it, but also through the design. In my opinion two of the most influential designers of today’s fashion world, Demna Gvasalia – designer of Vetements and Balenciaga and the designer Rick Owens are still somehow getting influenced by the antifashion movement, even though most of the antifashion designers haven’t been active for their own brand in many years. But how can you see the antifashion aspect in modern-day designers’ work? While you can’t necessarily see it in the aesthetic, Demna Gvasalia is more influenced by the philosophy of the antifashion designers by making satirical political statements through his clothing and recycling looks of other cultures that aren’t usually seen as fashionable. His approach to fashion is very ironic and his goal is often to do exactly the opposite of what you would normally consider high fashion, bringing the aesthetic of the lower class and the former soviet bloc into high fashion. He criticizes fashion while still being one of the most influential designers and setting many trends. Rich People that are unaware of the satire behind the clothing will buy these products, often just because they want to show their status by wearing Balenciaga or Vetements. By buying these products without the knowledge of them being satire and a political statement, often against consumerism, they play into the statement Demna Gvasalia is trying to make. Balenciaga and Vetements are therefore kind of making fun of their rich consumers who are buying without thinking – just wanting to flex. The whole philosophy behind the design and also marketing is such a paradox and ironic that it becomes antifashion. A designer making clothing originally against the current trend by using unglamorous references, but then becoming the trend because the “Balenciaga” or “Vetements” branding is being used. Demna Gvasalia is there an antifashion designer in the purest sense by turning things that are usually seen as unfashionable into high fashion. Rick Owens however is taking more from the aesthetic part of antifashion – designing dark, deconstructed and distressed clothing. His garments can be compared to the original look of antifashion from the late 80s up until the early 2000s.

But can we still view modern-day antifashion in the same way we did back in the day? The distressed and dark look got really mainstream over the years. In everyday wear, distressed garments like ripped jeans got really popular and generally used-looking clothes like vintage clothing. Arguably, this evolution wouldn’t have happened without those designers back in the day. On a smaller scale, microtrends like “subversive basics” on TikTok are also taking part in this aesthetic. But also regarding high fashion, the aesthetic, as well as the philosophy behind it got popularized by designers like Rick Owens and Demna Gvasalia – even antifashion labels from the 90s like Comme des Garcons and Margiela are popular today. Certain garments with a high recognition factor are even being used by modern-day hypebeasts. The original philosophy of the movement – designing contrary to the current trend kind of loses all meaning through the popularization of the aesthetic because it became a trend in itself. But is that necessarily bad? In one way, many people are just dressing that way to follow a trend, which makes the original thought behind the design lose all meaning. On a more positive note, some people might find their own aesthetic by being introduced to this philosophy through this trend and will stick to it even after the trend dies out.